I made a Chrome extension that turns internet articles, blogposts, and longform content into PDFs that print and fold into a pocket sized newspaper.

How many tabs do you have open right now? Is it so many that only the icons are peaking through? You might have some articles buried in there. You saw a headline that piqued your interest and gave it a click. Then you scrolled — a lot. It might still be up there, waiting for you to find the time, or the focus, or the perfect moment. If you can manage, bravo to you. If you can’t, then you’re like myself and many others.

People enjoy reading on the beach. But imagine this beach: where three genres of music are playing at the same time, single engine planes are dragging banners across the sky, scantily clad tan bodies are abound, wind keeps blowing your hat off, and high tide hits you with a heavy surge out of nowhere. That’s like reading on the internet. So if those tabs sit up there for a few days until you’ve got to close them to make room, it’s understandable.

I won’t go into the attention economy diatribe about tech companies making money by hijacking your brain for ad impressions and data. Despite some saying they’re working on it, their business is still your “engagement”. You’ve heard all that. But it’s fundamentally why reading on the internet is hard. It wasn’t originally, but now it’s by design. Whatever article you may have open is constantly competing with dopamine farms like Reddit, Twitter, etc. That makes getting through the opening paragraph seem like a superhuman feat of self control. So what do we do? There are apps out there that send articles to your phone, but for reading, it’s worse — tinier screen, easier access to distractions, like the beach above but with seagulls defecating on your book. 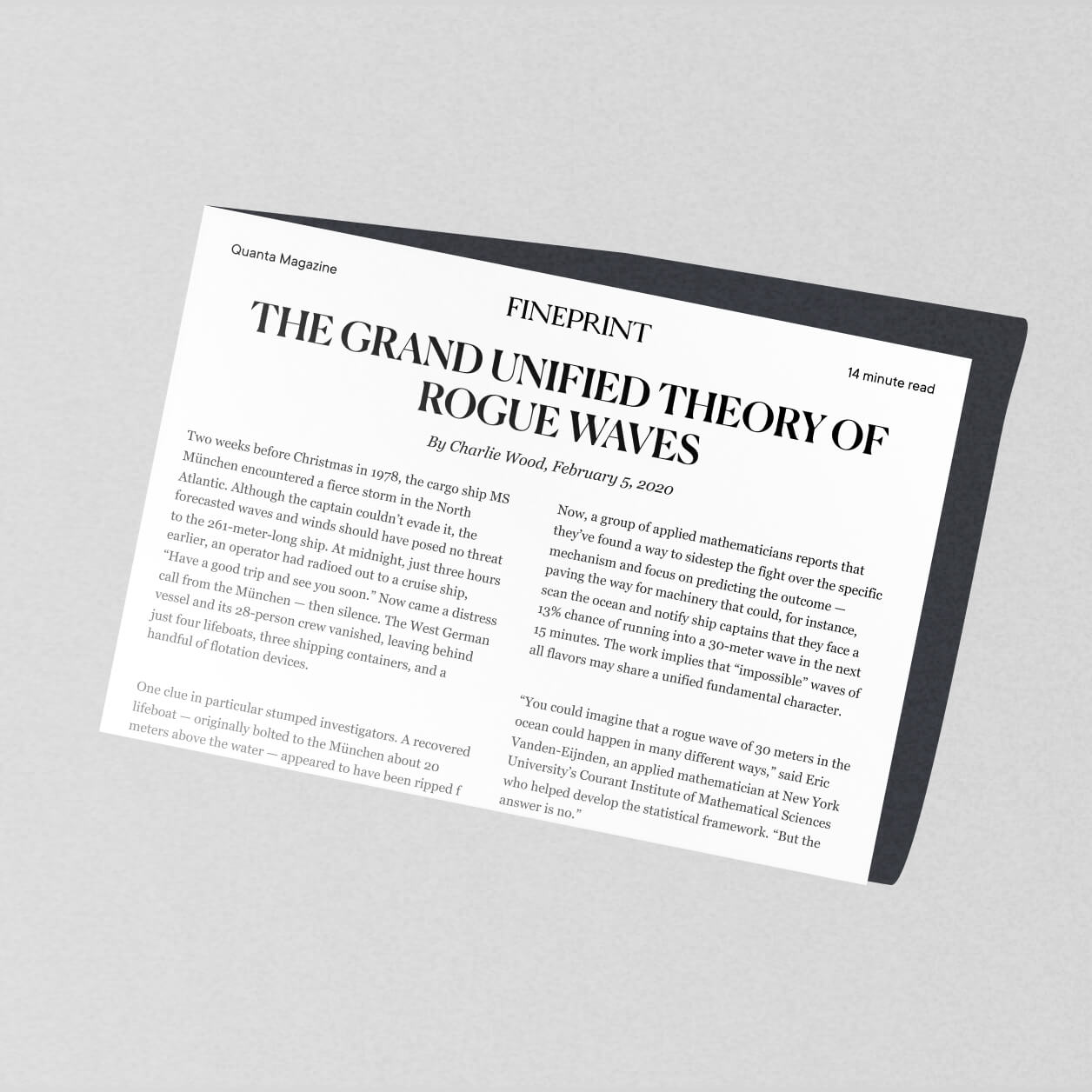 The inspiration for Fineprint came from an article in the Paris Review titled “Reading in the Age of Constant Distraction.” In it, the author describes the works of Sven Birkerts, an essayist who laments the decline of reading brought on by the internet age in his book The Gutenberg Elegies: The Fate of Reading in an Electronic Age. He wrote the book in 1994 and the millennial aged author reflects on the ideas put forward by Birkerts 25 years later. The authors’ prose recounts vivid memories of dialup modem sounds, being young and witnessing a monumental cultural shift, and being frustrated with where we are today. I’m frustrated too. I quit social media four years ago. I’m one of those guys, but also one that would build a Chrome extension that turns internet articles, blog posts, and longform content into PDFs that print and fold into a pocket sized newspaper.

Who has the time?

I’ve found them best enjoyed on saturday mornings, before bed, on planes and trains.

What if I don’t have a printer?

They’re easier to find than you might think. How about the printer at work? No? Send it to your partner/spouse to print at their office. Or print it at your parents’ house, the local library, the business center of your luxury apartment building. You could even go to Kinkos and print them all at once on nice paper.